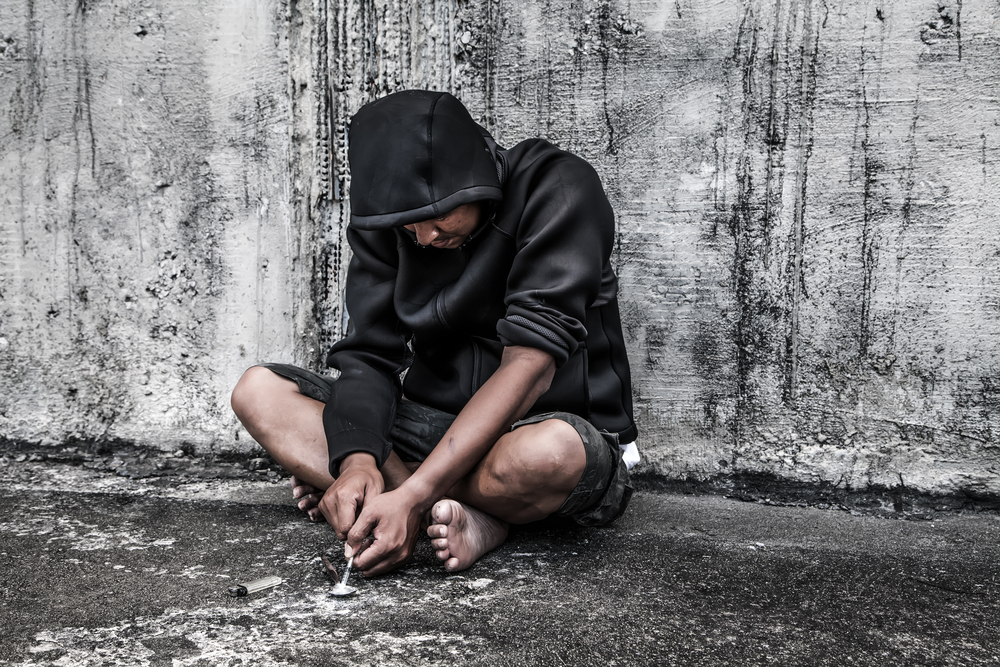 About the name. Krokodil is so named because once the drug gets into the bloodstream, it begins to eat away at the skin from the inside out, leaving behind dark, scaly scabs resembling – you guessed it – crocodile skin. Worse, the infected skin becomes gangrenous, and, in many cases, limb amputation has been necessary to save a user’s life.

No, it is not a pretty picture.

Here’s what the American Journal of Medicine says about how it’s made:

Krokodil’s root agent is desomorphine, a synthetic derivative of codeine. It can be made by boiling some codeine-containing medication (CCM) with a diluting agent such as paint thinner, gasoline, hydrochloric acid, or iodine. In a pinch, you can even use red phosphorous (which is scraped from matchbox strike pads). Because of the high degree of toxic chemical contamination, regular use results in severe damage to the vasculature, muscles and bones. Krokodil is also known to cause multi-organ failure. Consequently the drug’s mean survival time is two years from its first use.

Hear that? Use krokodil and you’ll be dead within two years. Period.

Word is the Russian government purposely spread krokodil in order to get rid of the country’s growing drug addict population. That’s largely because a) addicts are considered a disease and b) Russia has no such thing as recovery. Not for drugs anyway. Yes, the authorities can handle drunks (after all, vodka makes the government almost as much money as petrol), but they refuse to address drug addiction beyond incarceration. That’s why you can get 10 years for a gram or two of 1% pure heroin, but you can’t get rehab.

Boo hoo, right? Well, boo hoo is right. Russia may seem to be far away, but the Ukrainian incursion proves the country is still far too close for comfort. There’s nothing the Russian government would like more than to infect Americans with krokodil. Why? Because the United States is everything Putin wants Russia to be and can’t. We’re successful. We’re popular. And we’re free.

In fact, we’re a whole host of great good things Russia will never be. That’s why Putin launched the Ukrainian War in the first place. (Yes, he’s crazy enough to attack an entire sovereign country if it will in some way cause difficulties for us.) It’s also why there seems to be a new effort to spread krokodil into Europe.

Krokodil initially leaked across Russian borders back around 2011, when the drug was still relatively new on the scene. Like any new new thing, people immediately perked up their ears. Once they found it was a way to get sky high at a fraction of the normal price, they also rolled up their sleeves.

Well, some of those people rolled ’em up anyway. Yet after realizing the drug’s deadly toxicity, a large chunk of those people immediately rolled those sleeves back down. And fast. It wasn’t just that krokodil could kill you (though of course there was that). It was that krokodil would slowly kill you. And all that eating of the flesh would be anything but sweet. If anything, death by krokodil would be absolutely, positively torturous.

Anyway, after that initial rush, krokodil basically stayed off Western radar. The drug didn’t go away though. Not in Russia. Why would it? The country didn’t change. The landscape remained bleak, opportunities stayed non-existent and people were still miserable. Krokodil still managed to take away all that bleak, hopeless misery too. And it still only cost a few kopeks a day.

But krokodil also still murdered and maimed. And when people didn’t lose life or limb, they often got HIV or AIDS.

Ten to fifteen years later, people continue to lose life and limb. They’re also now contracting HIV and AIDS at an astonishing rate. Back in 2016, Foreign Policy said Russia had an estimated 1.5 million HIV/AIDS sufferers and that the rate was growing at 10-15% annually. The Russian Federal AIDS Center claims a good 58% of those cases come as a result of intravenous drug use. Since the country has basically outlawed any and all preventative measures (i.e. needle exchange, harm reduction, MAT, etc), one can’t even imagine the current rate’s height.

In fact, even blogging about HIV/AIDS can be dangerous. Human Rights Watch reports that after twenty-nine-year-old Ilya Bronsky decided to help other HIV-positive Russians, he was summarily doxed then attacked in a Moscow courtyard. When he attempted to report the attack, the authorities gave him a blank arrest report and told him to send it in by mail.

Apparently Russia not only stomps its do-gooders, but they also celebrate their crybabies. That’s what Ukraine-backed UATV is reporting anyway. Seems a few of Russia’s most influential influencers recently went on hardcore crying jags. Why? Instagram and Facebook had suspended their accounts. You’d think the the tear-jerks would’ve known that flagrant propaganda would get them banned.

But we digress. This is supposed to be about a flesh-eating zombie drug, not Russia’s mixed-up, muddled-up way of looking at the world. Besides, It’s really not the Russian people themselves who are a problem – and they’re certainly not to blame. It’s their government. And Russians have about as much say-so in how their government’s operations as they do in the spin of the moon.

It’s been almost a decade since our world first got wind of krokodil. Hopefully, it’ll be almost another decade till we have to address it again. It’d be even better if our next address turned out to be an obituary. After all, the flesh-eating zombie drug has certainly caused more than its fair share of obituaries. Right now though, people are still risking life and limb for some kind of dirty, bullshit half-high. Worse, these people risk spreading that deadly foolishness to the West. Remember, there are untold thousands of underpaid, unhappy Russians currently engaged in occupying a foreign country. You can’t tell us that some of those soldiers don’t feel like getting high.

Best then to consider krokodil to be a cautionary tale. A story about what not to do, to be sure. Under any and all circumstances. Because no matter how bad a day might be, a flesh-eating zombie drug will only make it worse. Worse, it also just might remove the possibility of enjoying a much better tomorrow. And better tomorrows are almost always preceded by very bad days. It’s in the stats.

Krokodil is not only something you don’t personally want to do to yourself; it’s also something you don’t want done to someone else. And that, friends, is basically what happened in Russia. The state government found a way to wreak deadly havoc on addicts, and it’s been mad at it for over a decade. Can you imagine how much those officials could’ve have accomplished had they instead put weight behind recovery?

Fortunately, U.S. authorities seem to have gotten that message. And every day in every way we here about more and more efforts designed to help rather than punish. After decades of mostly punitive measures, it’s like seeing a whole new day dawning across America. Okay, so maybe we’re still a ways away from celebrating a complete paradigm shift. But there is good cause for celebration. There’s also good cause to keep advocating for more and better treatment options – for everyone.

Yep, we’re happy to say that sobriety is becoming something of a thing. A damn good thing. Now we need for that thing to become the thing – permanently. It’s happening, you know. In fact, each and every newly sober person brings us that much closer to permanence. If you take into consideration the rate at which sobriety spreads, well, we might soon be writing recovery in indelible marker.

How about you? Have you kept clear of the wicked krokodil? How about its equally lethal relatives? All of those pain pills kill too. Whether or not they’re stamped with the names Lortab, Norco, Vicodin, Percodan, Percocet or Dilaudid. The powders kill too, especially fentanyl. And if it comes in a powder, it’s likely spiked with fentanyl. That includes cocaine, heroin and meth. Heck, these days dealers are even dropping fentanyl into cocaine base before it’s cooked. So now even a crack hit can kill you.

Yes, as we said above, krokodil makes crack and smack look like health foods. But that doesn’t make crack and smack good for you. It simply means they probably won’t eat away at your flesh until you’ve got to chop off a limb. They’ll still get to you though. And they’ll still bring you down too. Trust us.

Better yet, call us. Grab the phone and punch in the necessary 10 digits for Healing Properties. Why not? You don’t want to waste another day, do you? More importantly, you don’t waste another day risking your life. And the more days you waste playing fentanyl roulette, the less chance you have of sticking around for awhile. And we’d like you to be here for a good long while.