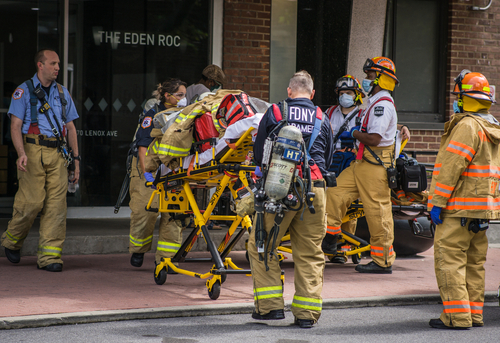 Hard to believe we’ve come to a place where the War on Drugs seems almost quaint in comparison, but there you have it. Or there we have it anyway. All of us. Because there’s not a person in all the land who hasn’t in some way, somehow been touched by the plague of narcotic-related deaths. The latest round of widespread loss is being attributed to something called mass-overdose events, which is as frightening as it sounds. It’s also just as lethal.

In fact, it’s so widespread and so lethal that the U.S. Drug Enforcement Administration has seen fit to issue a nationwide warning. It’s the second such warning in six months.

The DEA defines mass-overdose events as three or more overdoses in a single location at the same time. They generally take place in a private home or hotel room, but they can occur at a club or a bar or even at the beach. Whatever the location, these events can be lethal. In fact, without Narcan close at hand, they often are.

“Fentanyl is killing Americans at an unprecedented rate. Already this year, numerous mass-overdose events have resulted in dozens of overdoses and deaths. Drug traffickers are driving addiction, and increasing their profits, by mixing fentanyl with other illicit drugs. Tragically, many overdose victims have no idea they are ingesting deadly fentanyl, until it’s too late.”

Wilton Manors is a small South Florida city located about three miles from Fort Lauderdale Beach. It’s got a big LGBTQ population, and a party vibe to match. In fact, the town’s signature Drive is packed with hopping bars and restaurants, most of which stay open well into the wee small hours of the morning.

As you might suspect, there’s a lot of vacation activity. And there’s not a block in all the Manors that doesn’t boast at least one AirBnB. It was at one of these AirBnBs where seven people suffered fentanyl overdoses on Thursday March 10. Fortunately first responders were able to administer Narcan before any of the victims succumbed. Two though did end up in critical condition.

Thing is, only four of the seven actually consumed any narcotics. That’s right. Three didn’t even do any drugs. They all overdosed after performing CPR on their fellow vacationers. That’s how much fentanyl there was in the cocaine they’d bought round the way. So much that it almost killed the friends of those who got high.

Okay, so we really don’t know if they were all friends. Frankly, we don’t know which of the seven actually did drugs either. We do know though that some of the victims were West Point Cadets, and that two of those Cadets play for Army’s football team. We also know everyone was in town celebrating Spring Break.

Most of all we know this was yet another one of those mass-overdose events we’ve been reading too much about lately. The very same kind of incident that caused the DEA to issue its warning.

Police were able to track down the culprit though.

Party people weren’t as lucky in St. Louis on Saturday, February 5th. That’s the day when police and firefighters responded to numerous 911 calls coming from the Parkview Apartments on the city’s Central West End. By the time the day was over nine people had suffered fentanyl overdoses. Unfortunately, six of those people never saw Sunday. A seventh died later in the week.

Like in Wilton Manors, police were able to quickly track down the drug dealer. Unlike the South Florida event though, the fentanyl came via crack, which the dealer had been selling out of her crackhouse/apartment.

“We are seeing fentanyl in the St. Louis area at record amounts, being included in counterfeit pills sold as regular power mixed with other substances, such as cocaine, heroin, and meth,” said Colin Dickey, Special Agent with the DEA’s St. Louis Division. “Some folks may not know that fentanyl is contained in these substances, adding to deaths by overdose.”

We get it. Unsuspecting drug user gets blindsided. But this mass-overdose event took place in one apartment over the course of nine hours. That means, the dealer just kept selling the lethal drugs despite prior customers overdosing. It’s almost as if she opened back up for business the minute the ambulance pulled away. She probably should have just asked them to stick around. Save time, gas and – who knows? – maybe even a life or three.

As you might suspect, these mass-overdose events aren’t at all prejudicial. In fact, fentanyl will just as cross a regional and/or economic divide just as surely and easily as crossing the street. In our nation’s capital, 10 people on a single city block smoked fentanyl-laced crack. Nine of the 10 died. Similarly, on March 4th an Austin, Texas homeless shelter saw 21 people overdose after smoking fentanyl-laced crack and meth. In that instance three people didn’t make it.

Authorities are still attempting to get a read on what’s going down up in Omaha, Nebraska. Right now they know two of four overdose victims died, and that they’d ingested fentanyl-laced cocaine. They also know the incident qualifies as a mass-overdose event. Beyond that things are still murky.

And those are just the ones we’ve been able to test, he added.

Things have gotten doubly deadly for whoever heads down the road to Colorado. That’s where two mass-overdose events – one in Cortez, the other in Commerce City – claimed the lives of eight people. Five of the eight were part of a six-person event in Commerce City, where the believed-to-be cocaine turned out to be nearly pure fentanyl. The three Cortez victims had all taken fake oxycodone.

An End to Mass-Overdose Events

Healing Properties has been on the fentanyl case since at least 2018. We’ve covered the personal side of this generally lethal equation. And we’ve also covered its public side. You know, the rash of arrests, the crush of media interest, and yes, the mass-overdose events. We even helped the DEA spread the word last September when the agency launched its One Pill Can Kill Campaign. Then we followed up with a drive-by heralding that DEA full court press which jailed nearly a thousand international narco-traffickers in less than two months.

We’ll stay on the case too, so long as Americans are being murdered by these egregious drug dealers. Would abstinence eliminate the risk of mass-overdose events? Of course it would. But that’s just like staying off the road will eliminate your risk of a fatal traffic accident. At the end of the day, some people just have to drive. That doesn’t make it okay to kill them.