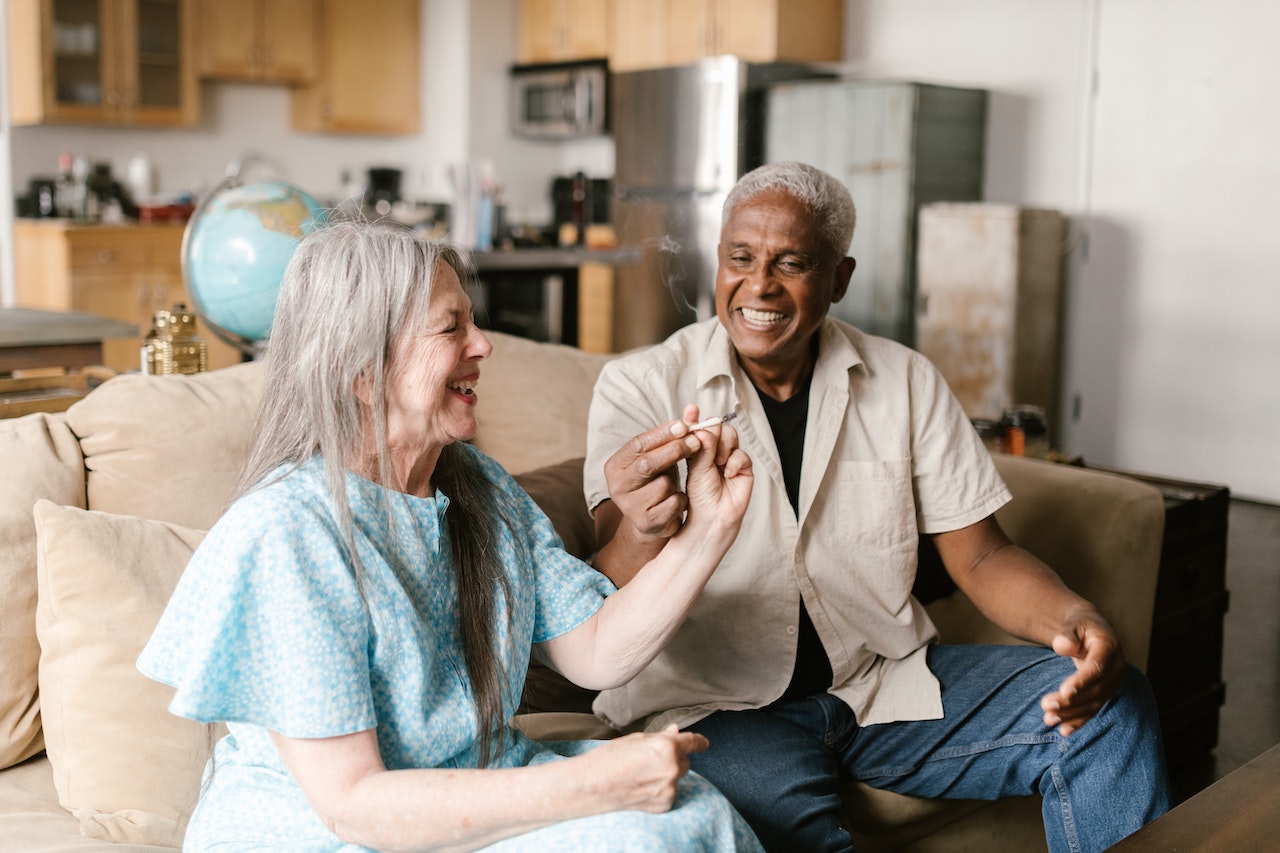 As if victims of gunshots, traffic accidents, natural disasters and pandemics weren’t burden enough, now hospital emergency rooms are being forced to deal with a wave of ailments not seen since the folks succumbed to bathtub gin and rotgut whisky. We’re talking about stoned seniors, dig? No, not high school seniors – senior citizen seniors. Many, many of whom are finding the current marijuana climate just a tad too intoxicating.

It kind of makes sense. After all, aren’t these the sort of people who think they know best, but really don’t> The group who believes that since they have been there and done that once, there’s no reason that can’t come back and do it again? Well, now it appears their belief is so wide and so deep that it threatens become a bona fide health emergency.

How wide and deep? Well, according to the University of California San Diego School of Medicine, 12,167 wide and deep. That’s how many stoned seniors UC San Diego says entered emergency rooms in 2019. And that’s just from a single state!

Okay, so it’s America’s largest state. That doesn’t make the numbers any less staggering – or the burden any less burdensome. It doesn’t rate great for the fate of the other 49 states either.

“This ain’t your grandpa’s marijuana!”

It ain’t your grandma’s either. But far from being a dumb joke Beavis shares with Butthead, the common belief is that marijuana potency has risen to levels that some medical professionals consider downright dangerous. While that might be something to think about the next time you see a park bench full of stoned seniors wondering which way is up, it also might not be true.

That’s what Atlantic Executive Editor Adrienne LaFrance discovered back in 2015. In fact, the research makes clear that NIDA’s own Potency Monitoring Program not only used unreliable methodology (gas chromatography), but it often only had access to inferior product. Equally skewy, “over the past several decades, the age of [NIDA’s test] samples has varied from a few weeks old to a few years old—and researchers made no attempt to compensate for the loss of THC during prolonged storage.”

There’s more, of course, much more. And if you’re seeking to be fully edified on the subject, we, ahem, highly recommend you dig into LaFrance’s findings, which still hold true today. Heck, even the good folks at Herb are on the same wavelength.

“Reports show that pot in the 1970s had THC levels of around 1%,” said Herb at Herb, while today’s product averages “more than 6-8%.” Like LaFrance, Herb also cites shelf life as an indicator of a product’s measurable THC levels. That immeasurability especially held true back in the ‘60s and ‘70s.

“Imports could take months to arrive,” said Herb, “and during transport [the product also] was exposed to high temperatures, thus reducing the buds potency.”

And thus getting stoners a lot less stoned.

Then came hydroponics. Weed could now be grown locally – and sold swiftly. Hydroponics begat hybridization, challenging this new breed of local growers to create ever stronger weed. Either the folks are Herb have been smoking the new breed of weed or the “awesome infographic” they used to back up their data apparently expired, because everything gets blurry after that. Nevertheless, you get the idea.

Yes, modern weed is stronger than so-called hippie weed, but the chasm isn’t quite as vast as folks believe.

Strong Enough to Stone Our Seniors

In other words, today’s marijuana is certainly strong enough to over-stone our seniors. The fact that pot now comes in an unlimited array of tasty varietals only makes the stoning more expedient. So do the increasing number of topical concoctions.

To be fair though, most of these stoned seniors aren’t setting out to merely get stoned. In fact, the UC San Diego “researchers report that older adults use cannabis primarily for medical purposes.” The most common of these purposes are “pain, sleep disturbances and psychiatric conditions like anxiety and depression.”

How do we know? Well, that’s just how Michelle Brubaker and Scott LaFee wrote it all up for the UC San Diego Health Newsroom back on October 07, 2020. Brubaker and LaFee also went to the sources, including study co-first author Christopher Kaufmann, PhD, who at the time was an assistant professor in UC San Diego’s Division of Geriatrics and Gerontology.

Not only were pain, insomnia, anxiety and depression “the most common reasons for cannabis use,” said Kaufmann, who’s now with the University of Florida’s College of Medicine, “[but] for the most part, cannabis was helping to address these issues, especially with insomnia and pain.”

Weed Instead of Benzos?

Cannabis use among seniors is only going to increase. As pot use increases, so too will its potential – to help, as well as to harm. That raises a lot of questions. Questions researchers will need to answer in order for the clinical workforce to safely and effectively navigate this new treatment landscape.

What About Those Other Stoned Seniors?

Yes, what about those other stoned seniors? You know, the one’s these stoned seniors used to be, only a whole lot different. We mean, stoned high school seniors. How are today’s kids navigating the wide open, extra strength marijuana landscape? Are they smoking more than ever? And what kind of effect is it having on their heads?

Well, according to NIDA’s Monitoring the Future survey, the kids seem to be doing better than expected. In fact, you might say the kids alright indeed. And get this – COVID seems to have actually helped.

Cannabis use “remained stable” for eighth, 10th and 12th graders through 2022, reports NIDA, with a respective 8.3%, 19.5% and 30.7% reporting cannabis use in the past year. While there was a “small increase” in 10th grade cannabis vaping, “ reported use among in 2022 is still significantly below pre-pandemic levels.”

Furthermore, “the percentage of adolescents reporting [any] substance use in 2022 largely held steady after significantly declining in 2021.” In fact, “after the onset of the COVID-19 pandemic and related changes like school closures and social distancing, reported use for almost all substances decreased dramatically from 2020 to 2021.” [emphasis added]

The numbers come from Monitoring the Future, a survey “conducted each year by researchers at the University of Michigan, and funded by NIDA,” which, of course, is “part of the National Institutes of Health.”

“The Monitoring the Future Survey is one of the best and most timely tools we have to monitor and understand changes in substance use among young people over time, including through historic events such as the COVID-19 pandemic,” said NIDA Director Nora Volkow, M.D.

The good Dr. Volkow is especially encouraged to “not observe a significant increase in substance use in 2022, even as young people largely returned to in-person school, extracurricular activities, and other social engagements.”

So What Do We Do About Stoned Seniors?

Healing Properties is tremendously heartened to see substance abuse seems to be falling out of favor with America’s young folks. Perhaps they’ll take a page from the stoner seniors and begin to see marijuana’s medicinal possibilities. Whether they do or don’t though doesn’t detract from the fact that more and more older folks are having issues navigating today’s marijuana landscape.

The clinical workforce needs to be fully aware of “both the benefits and risks [to] their patient population” said UC San Diego School of Medicine’s Division of Geriatrics chief Dr. Alison Moore, who was also the senior author of the above study. In fact, the good doctor suggests that we may want to “incorporate evidence-backed information about cannabis use into medical school and use screening questions about cannabis as a regular part of clinic visits.”

Healing Properties concurs wholeheartedly. We also wholeheartedly thank Drs. Moore, Kaufmann and everyone else aligned in their university’s Division for conducting such a timely and necessary study. It’s this kind of research that will lead to a safer populace, and these kinds of researchers who’ll lead us there.

We’d also like to Thank UC San Diego’s Michelle Brubaker and Scott LaFee, The Atlantic’s Adrienne LaFrance, NIDA’s Dr. Volkow, NORML Deputy Director Paul Armentano, NBC San Diego’s Eric S. Page, and, er, Herb at Herb, as well as all the Monitoring the Future researchers and participants, from NIDA, the NIH, the University and Michigan and beyond.

And you? Are you or your loved one having marijuana issues? If it’s medical, please see a doctor. If it’s habitual, well give us a ring. Cannabis can be abused, just like every other substance. And that’s no good for anyone.