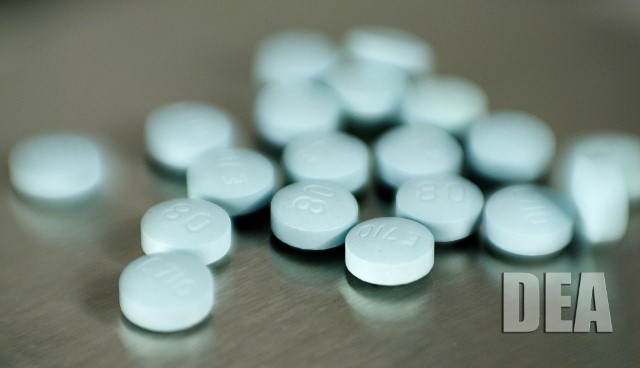 By now you probably know the U.S. Drug Enforcement Administration has been seizing fake pain pills at an unprecedented rate. You probably also know each batch needs to be chemically-tested before any criminal case can proceed. For seizures made in Kansas and Missouri, that testing is done in the DEA’s state-of-the-art Chicago lab.

It’s essential work. The crucial nail in the coffin of every DEA drug case, if you will. It’s also incredibly perilous. For more often than not, the drugs being tested contain fentanyl, which kills by the milligram. If such a substance imperils trained professionals, just imagine its risk to the general population.

The DEA gave KMBC 9 News Investigative Reporter Matt Flener exclusive access to its Chicago lab so he could bring us up close to this increasingly demanding work. That access also allowed Flener and his team to show us how these counterfeit prescription pills remain lethally dangerous even after they’ve been taken off the streets.

All roads lead to Chicago. All DEA Midwest drug testing roads anyway. That includes both Kansas and Missouri, where the agency is seizing fake pain pills in record numbers. Samples from those seizures get sent to the DEA’s Chicago lab, where 30 forensic chemists detail everything from compound composition to the degree of purity. It may just be one way the DEA helps support federal prosecutors and law enforcement in their efforts to stop drug dealers, but it’s an important one. 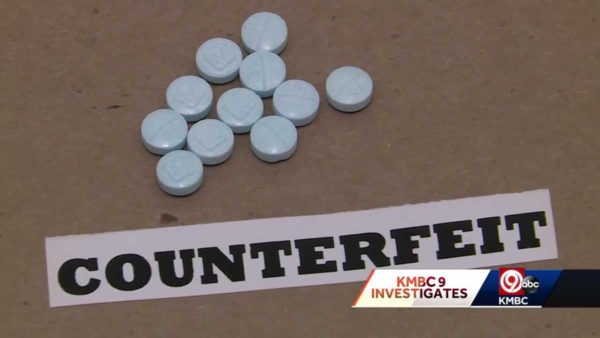 That’s obviously why KMBC 9 Investigates recently received exclusive access to the lab. And good that they were too. Because a glimpse at the growing amount of fake prescription pills seized by federal agents allows us all a bit of perspective. When we see how often those pills are laced with deadly fentanyl though, that perspective goes off the rails – or out the window.

“This is all from one exhibit,” says forensic chemist Tycho Spadaro as he showed the KMBC 9 Team a pile of fake oxycodone pills. Note the kaleidoscopic array of white, green and blue.

Spadaro notes the colors alright, and how easily those pretty colors could lead people astray. But he’s after even deeper notes. See, Spadaro specializes in breaking down the exact chemical structure inside those picture-perfect pills. No need to tell him how often he finds fentanyl mixed into the picture.

No one needs to tell the ace chemist whether or not we’re in a bona fide crisis either.

“I think the opioid crisis is real,” he tells KMBC.

In fact it is so real the lab’s evidence vaults have added an average of 1,000 exhibits every year for the past five years.

“We’re very, very, busy these days with all the drugs that are being seized,” said DEA Chicago lab director Melanie Domagala.

It could be the understatement of the century.

The only way fake pain pills make sense to the Cartels though seems to be if they’re made from fentanyl. But why?

Spadaro shakes a few flakes of powder on a penny…

“That’s just how little it takes,” she says.

Sadly, untold thousands of Americans are learning this the hard way. Even sadder is the grip these fake pain pills seem to have on our young people. Some take them to experiment, says the report. Others take them thinking they will ease their pain.

But those deaths don’t seem to have stopped the Cartels from smuggling fentanyl. If anything, they seem to be even more galvanized.

In fact, KMBC saw fentanyl included in everything from pain pill capsules to kilos of heroin.

“Fentanyl is a game changer,” said Michael A. Davis, special agent in charge of the DEA’s St. Louis Division.

“We’re doing a lot of work out in the field,” he told KMBC. Then he added, we’re seizing a lot of drugs.

It was yet another severe understatement. Then again, when drugs are seized to such an extreme degree, everything is an understatement, even Davis’s praising of the Chicago lab.

‘We could not stop drug dealers without them,’ he says.

One Pill Can Kill

Healing Properties praised the DEA’s One Pill Can Kill Public Service Campaign last September. We followed up by citing its social media component in February. We continue to praise the work now. It’s informative. It’s comprehensive. And, like all the agency’s efforts, it’s essential. It’s also crucial that young people get this information.

KMBC knows this. Heck, the station provided their own Public Safety nudge to boot. But please don’t think for a second you don’t need to hear it again. The DEA campaign’s tagline is no exaggeration. One pill really can kill. And with these fake pain pills, you won’t even know until it’s too late.

That last arrest actually proved to be a good thing. A damn good thing. Wahl will be the first one to say so too. Indeed, she now credits the jail time with saving her life.

It certainly got cheers from Clay County Sheriff’s Office Drug Task Force Sergeant Gary Blackwell. In fact, the man-in-blue’s been behind Wahl all the way. And now that she’s over a year clean and sober, the hard-nosed cop is beaming like a proud papa.

“She had some serious obstacles to overcome – legally, medically – and she did it,” said Sgt Blackwell. “[And] I am so proud of her. I can’t tell you how proud I am of her.”

Yep, Blackwell saw Wahl at her lowest, alright. Now he gets to see her at her brightest. That includes being up on stage helping others.

It’s all part of the Sheriff’s Office countywide drug summits, which took on extra urgency after Oak Park High School sophomore Ethan Everley overdosed and died in April. Blackwell believes Wahl’s message will help kids come to terms with the loss. We suspect he also believes her story will help them realize just how close overdose can be, even for the most vigilant.

Flener and KMBC 9 News must also believe in Wahl’s message. Why else a spot in their broadcast? We pray that message gets across.

Saving Lives – One at a Time

Healing Properties congratulates Shelby Wahl on her newfound sobriety. We also applaud her spreading that sober message everywhere she goes. Going from jail to sobriety takes great fortitude. Speaking publicly about it takes real courage. Wahl’s willingness to share her story shows she’s got ample amounts of both.

We’d also like to thank Sergeant Blackwell for recognizing Wahl’s strengths, and for helping her summon them once and for all. People are too often just one strong supporter away from making it through to the finish line. We’re very happy to see that Wahl found her strong supporter.

We’ve also got a very special thanks for KMBC 9 News Investigative Reporter Matt Flener and the entire KMBC 9 Investigates Team. Stories don’t get told without tellers, of course. And here the team told two stories in a manner that made both worth retelling again and again. (This isn’t the first time either, the station’s State of Addiction section is full of great stories.) Special thanks too to the agents and chemists behind the DEA story. After all, without them there is no story to tell. And at the end of the day, both storytellers and crime-fighters deserve our deepest gratitude.

How about you? Are you ready for a new chapter in your story? Do you have a message ready to share? Could you use some help? If so, give us a ring. Please. We’ve been helping folks better their stories for 20 solid years; we’d be honored to help you do so too. Really.