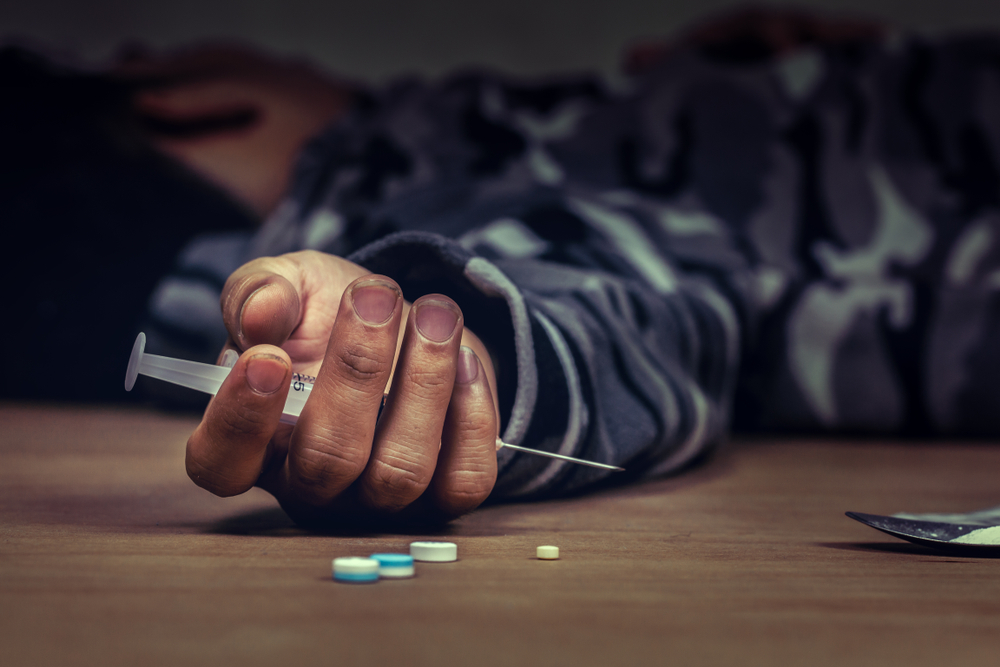 Jake is missing three fingers. Two from his right hand; another from his left. They’d been gnawed away from the inside out, then removed at the base before the infections could spread. The doctors had no choice. In fact, Jake could have easily lost his hands too. The same thing happened to his right foot. That’s why Jake is two toes short of the normal 10. The doc said the toes had to be hacked off or the foot would rot and die right along with them. He didn’t however say much about Jake’s other abscesses. Didn’t do much about ’em either. He couldn’t. Those gaping holes weren’t like anything he’d ever even seen, let alone treated. Not on an intravenous drug user. Then again, the doc had never gone up against a concoction called Tranq.

With heroin out like the dodo and fentanyl just about down for the count, tranq is fast becoming the next new new thing. The name originally applied to fentanyl cut with xylazine, a veterinary pain killer and muscle relaxant. With fent ever harder to come by though, the mix is now mostly xylazine. That’s creating a whole host of new problems. And yes, one of them is tranq’s tendency to literally eat opioid users alive.

“When I was in training between 2009 and 2014, it was unusual for me to have a patient who had an amputation related to an opioid use disorder. Now, I can’t recall the last time we didn’t have at least one person on our service who was in danger of losing a limb – or who had already lost one or more.”

As Whelan’s insight-ridden expose makes perfectly clear, the two had a lot to talk about.

Actually, saying Martin and Whelan have a lot to talk about is kind of like saying addiction is a problem. Sure it’s true, but it in no way even hints at the depth of that truth. And right now, there’s no deeper truth than tranq.

“We know really well how to manage opiate withdrawal,” Dr. Martin added, “but there is no FDA-approved treatment for any xylazine withdrawal that may go along with that.”

That makes tranq an excruciating drug to kick. It also makes addicts much more inclined to either leave detox early or opt out of treatment altogether. In fact, an addict named Chuck told Whelan he last held out only 4½ days before fleeing the hospital. He hasn’t been back since. Oh, it’s not because Chuck didn’t want to get clean. It’s because he couldn’t stand the extreme pain that went along with it.

Then there’s naloxone’s inability to counteract a xylazine overdose, which means many addicts don’t even make it to the hospital. And those that do often wish extreme withdrawal was the worst that could happen. Then again, there are few things less appealing than skin necrosis. And that’s just what many tranq addicts have in their future.

Skin necrosis is pretty much just what it sounds like: dead skin syndrome. Oxford defines necrosis as “the death of most or all of the cells in an organ or tissue.” Since skin is an organ – the body’s largest, in fact – its death should be taken very seriously. And don’t be fooled by this particular organ’s capacity to consistently regenerate. You still don’t want to kill it. And injecting tranq, dear friend, is akin to murdering your own skin.

The killing isn’t limited to the point of injection either. In fact, tranq can elicit skin necrosis in an extremity just as readily as the torso, whether a person injects there or not. And when the malady does pop up – look out! It’s wicked-quick to spread and at least ten times slower to heal. Why? Well, at this point doctors aren’t entirely sure. Remember, xylazine was designed for animals rather than humans, so there’s very little research to fall back on. And though Martin says some anecdotal evidence has started to surface, “the data is still dragging behind a bit.”

What isn’t dragging are the anecdotes, which are about as frightening as it gets.

“I would inject in my neck, but the wounds would come out on my hands and legs. They’d eventually scab up. But once you ripped off the scab it would be like a crater under your skin. As if it were eating your flesh.”

How’s that for a wild high?

Say No Thanks to Tranq

We’re probably just minutes away from xylazine being banned and outlawed, which means Cartel chemists are likely already doing their best to synthesize a potent alternative. There’s absolutely no chance it’ll be any safer though. None whatsoever. Hell, it probably won’t even need a new nickname. Good thing too, because tranq is like a memory wipe. So users don’t have much capacity for any new remembering.

You can do one thing though. Check out Vice’s Benzo Dope and Tranq: The Next Wave of the Overdose Crisis and pay specific attention to a character named Gord. Note the instant zombification as he takes a hit of tranq. You might also scope the tell-tale wounds. And if those scopes don’t steer you away from putting that shit in your body, well…

This tranq thing is scary, especially since it’s more like battery acid than drugs. Feds say it’s all part of this new poly-drug wave. And that they’ve discovered over 30 new synthetics just in the last 12 months. They also say that fighting it is like playing Whack a Mole. A losing game of Whack a Mole.

That means it’s only going to get worse. Much, much worse. Those days of rockstar heroin or even dopestar fent are over. From here on out it’s only going to be mystery synthetics. The drugs won’t be treatable because they won’t be identifiable. And, sadly, that includes treating for overdose.

So forget the colorful euphemisms. Kensington Beach is just another way of saying Kensington Graves. And it won’t be long before one of the country’s most notorious open-air drug marts becomes one of the country’s largest open-air morgues. In fact, it’s already happening. The only way to stop it is by walking away. So, please. No matter how much it hurts. Do it while you still have feet to walk on.

Healing Properties has been helping men get sober for 20 years. We’d like to help you too. In fact, we’d be honored. So please. Give us a ring. Let us help. We’ll get you sorted, whether you’re in Philly or New Jersey or South Florida or wherever. Just make the call.