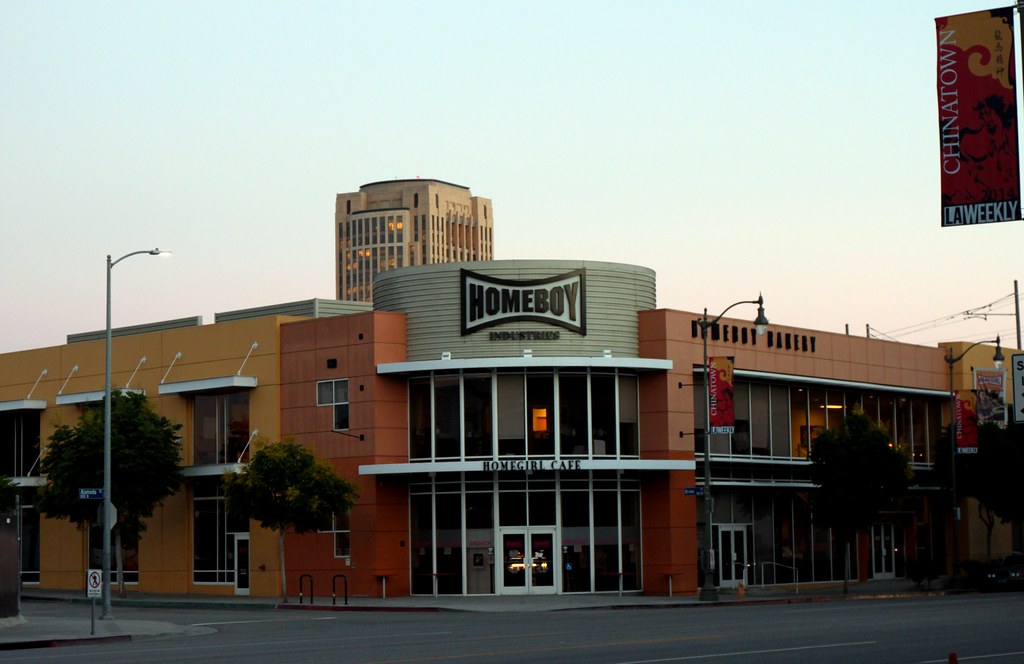 The guy’s name reeks of East L.A. history. And it should. Back alleys full of hard times and second languages; houses crowded with multi-generational bloodlines; skies redolent with the racket of riots. Yes, this is the home of Homeboy alright. And Homeboy is always at home.

But we’re not referring to the name Homeboy. Not right now. Sure, that’s what’s most familiar to folks. It also happens to be the name of one of the most successful endeavors to ever come out of Los Angeles. But right now we’re referring to Boyle, the very name given to our subject at birth.

We speak of Father Gregory Joseph Boyle, of the Society of Jesus (aka the Jesuits), the founder and CEO of Homeboy Industries. Some might also call Father Greg the de facto Mayor of Boyle Heights, and not just because he shares the name of one of East L.A.’s most storied neighborhoods.

Forget the fact that the predominately Chicano ‘hood now features an entirely new origin of immigrant than it did when the Jews made it theirs 100 years ago. You can also forget that our subject doesn’t technically belong to either tribe. Because on this side of the tracks, race and dates aren’t as important as strength and dignity. And Father Boyle’s Homeboy Industries has helped instill both in his beloved Boyle Heights.

Was it easy? Of course not. Few great achievements are ever easy. It did however prove to be an easier way. A much easier way. Even as the hardships persisted. Why? Well, it seems even the most extreme hardships aren’t built to beat equally persistent adversaries. And Father Greg and the Dolores Mission Parishioners who constitute Homeboy Industries are consistently persistent adversaries. Then again, consistent persistence is a definite necessity when you’re fighting poverty, violence, crime, and discrimination.

Father Greg learned it all up close and personal when he took over the parish lo those many moons ago. It was in fact pretty much how the Jesuit got his start. It was also how the ‘hood started to come up – big time.

This, friends, is the story of Homeboy Industries, the largest gang rehabilitation and reentry program in the country.

Consider it the equivalent to being thrown into the deep end of the pool in order to learn how to swim. The proverbial baptism by fire. An event so severe that only sheer survival instinct can save the day. That’s gotta be how Father Greg saw his first U.S. appointment.

The year was 1986. Father G had just returned from a two-year posting in Cochabamba, Bolivia. At the time the Central American city had around 400,000 people (it now has over 1.3 million), so it was not a small posting, especially for a brand new priest. Still it was nothing like an 8.4 million strong metropolis such as Los Angeles. It’s hard to say why the Jesuits would give a young priest the keys to an entire L.A. parish – after all, Father Greg was then only 32 years old – but give them they did. Turns out it was one of the best moves ever.

The Mission of Dolores Mission

By name it was Dolores Mission Parish. By reputation it was Trouble (yes, with a capital T). Not just because it was L.A.’s poorest parish (though there was that), but because it was also one of the city’s most violent. Then again, when the parish church sits between two gang-soaked housing developments, there’s probably going to be a good spot of Trouble.

Throughout the first half of the 20th century, Boyle Heights was actually one of the most racially and ethnically diverse neighborhoods in the country. Jewish, Mexican and Japanese immigrants lived side-by-side with a significant sprinkling of Yugoslav, Armenian, African-American and Russian populations. And up until the ‘60s, that’s basically how Boyle Heights remained. A picture perfect example of Melting Pot America.

Then came the freeway expansions and the redlining that went along with it. Redlining sprang from a grading system put into place by the Home Owners Loan Corporation (HOLC) under the aegis of the Federal Housing Administration (FHA). The system was ostensibly to assess the “desirability” of residential communities; what it really was though was a purely racist charting system that denied non-whites the opportunity to own their own homes. Neighborhoods like Boyle Heights were considered rank with “subversive races” (government officials’ official term) and thus not worthy of financial support.

The Japanese moved away first. Most of them had been interned during World War II so there weren’t many left anyway. The Jewish people quickly followed. Then went Russian, Polish, Armenian, Slavs, Greeks and Italians. Even the African-Americans fled for South L.A. So by the ‘60s any race that had another neighborhood to go to had left Boyle Heights. The Mexican community was the only one to remain. Why? Some say it was because they were largely undocumented. Others say because they had nowhere else to go. Still others believe it was because the Mexican people decided to stand their ground.

It was probably a good bit of all of the above. But whatever the reason (or reasons), by the ‘80s Boyle Heights had become predominately Mexican. The ‘hood had also become dominated by Mexican gangs.

White Fence were first. Named for the picket fence that surrounded La Purissima Church, the gang was an offshoot of the sports teams fielded by the church parish back in the early part of the 20th century. Originally known as La Purissima Crowd, White Fence went head-to-head with their White neighbors as well as everyone else throughout the ‘50s and ‘60s, but El Hoyo Maravilla was their most resilient foe. In fact, the two Hispanic gangs trace their feud back to the ‘30s.

White Fence continues to operate, though their operations have spread far beyond the barriers of Boyle Heights. In fact, Wiki says White Fence not only operates across much of Los Angeles, but they’ve also set up shop per se in Las Vegas and El Paso, as well as various parts of Florida, Mexico and Central America.

The gang’s enemies have also grown in number. In addition to still being at war with El Hoyo Maravilla (and all of its sets), they’re also at war with Varrio Neuvo Estrada and their other flats gang counterparts, as well as Florencia 13, which has also been around for nearly a century.

Father Greg though recognizes only the person, not the set. To him each gang member could be a future employee of Homeboy Industries. At the very least, they’re someone for whom Homeboy can be a real lifeline.

House Call with the Homeboy

Like just about everyone else in the world, the U.S. Surgeon General Vivek Murthy hosts a podcast. Unlike just about everyone else in the world though, Dr. Murthy’s podcast concentrates on others rather than himself. In fact, it concentrates on others who help others, thereby providing the good doctor a weekly opportunity to help as many people who help people as possible. The interview series is called House Calls. And it is indeed a worthy extension to Dr. Murthy’s duties as the 21st U.S. Surgeon General.

Getting with Fr. Greg was probably a no-brainer for Dr. Murthy. If there was any obstacle at all, it was likely simply being able to sync their schedules. After all, both Doctor and Father are two of America’s most active do-gooders. They’re also a pair of genuinely good people.

Like we said, in House Calls, Dr. Murthy seems to seek out those who help others, which is obviously why he sought out Fr. Greg. In fact, the doc spelled it out in the interview’s intro. He also spelled out what he’d like the reader to take away from the exchange.

I wanted to find out how Father Greg takes people from being deeply divided to working together, how he builds both trust and shared purpose, and how he creates resilience in the wake of trauma.

Father Greg told me his approach includes assuming the good in people and cherishing them so they feel connected. It sounds so simple, but the real art is in putting this philosophy into practice. And Father Greg is a master in the art of creating a world in which people feel they belong.

In this conversation, I hope you’ll find ways we can help each other, feel a sense of belonging, even when the world feels divided.

Emphasizing the best doesn’t get much better than that. Neither does wanting the best for others. And both Dr. Murthy and Father Greg are among the best our country has to offer. We should all feel blessed.

Reading the interview makes the blessing even better. We learn what trials and tribulations Father Greg faced with Homeboy Industries, as well as the persistent way he navigated on behalf of his community. And there wasn’t one second in Homeboy’s 34 year existence when Father Greg wasn’t out there fighting on behalf of Boyle Heights.

It’s the kind of life story movies are made about. But it’s also the kind of life story that’s bigger than any screen. It’s the tale of a real life legend. And if the world could even mimic a moment of its goodness, we’d be living in the best place ever. Father Greg really does make it seem as if we ourselves are the only things separating us from living in the best place ever. That means we are the only thing preventing us all from living our best lives ever too!

How about you? Are you ready to be in the best place, live your best life? Are you eager to be an asset instead of a liability? Do you truly, madly, deeply want to be the best that you can possibly be? It’s possible you know. Fully possible. If, that is, you get serious. Healing Properties has been helping men flip the script for 20 solid years. We know what it takes. And we know the route that leads there. So please, give us a ring. We’ll help you map out the way of a lifetime!

Wiki provides a nice summation of Homeboy Industries – so nice we thought we’d share it here:

The program is intended to assist high-risk youth, former gang members and the recently incarcerated with a variety of free programs, such as mental health counseling, legal services, tattoo removal, curriculum and education classes, work-readiness training, and employment services. A distinctive aspect of Homeboy Industries is its structure of a multifaceted social enterprise and social business. This helps young people who were former gang members and former inmates to have an opportunity to acquire job skills and seek employment in a safe, supportive environment. Among the businesses are the Homeboy Bakery, Homegirl Café & Catering, Homeboy/Girl Merchandise, Homeboy Farmers Markets, The Homeboy Diner at City Hall, Homeboy Silkscreen & Embroidery, Homeboy Grocery, and Homeboy Cafe & Bakery in the American Airlines terminal at Los Angeles International Airport.