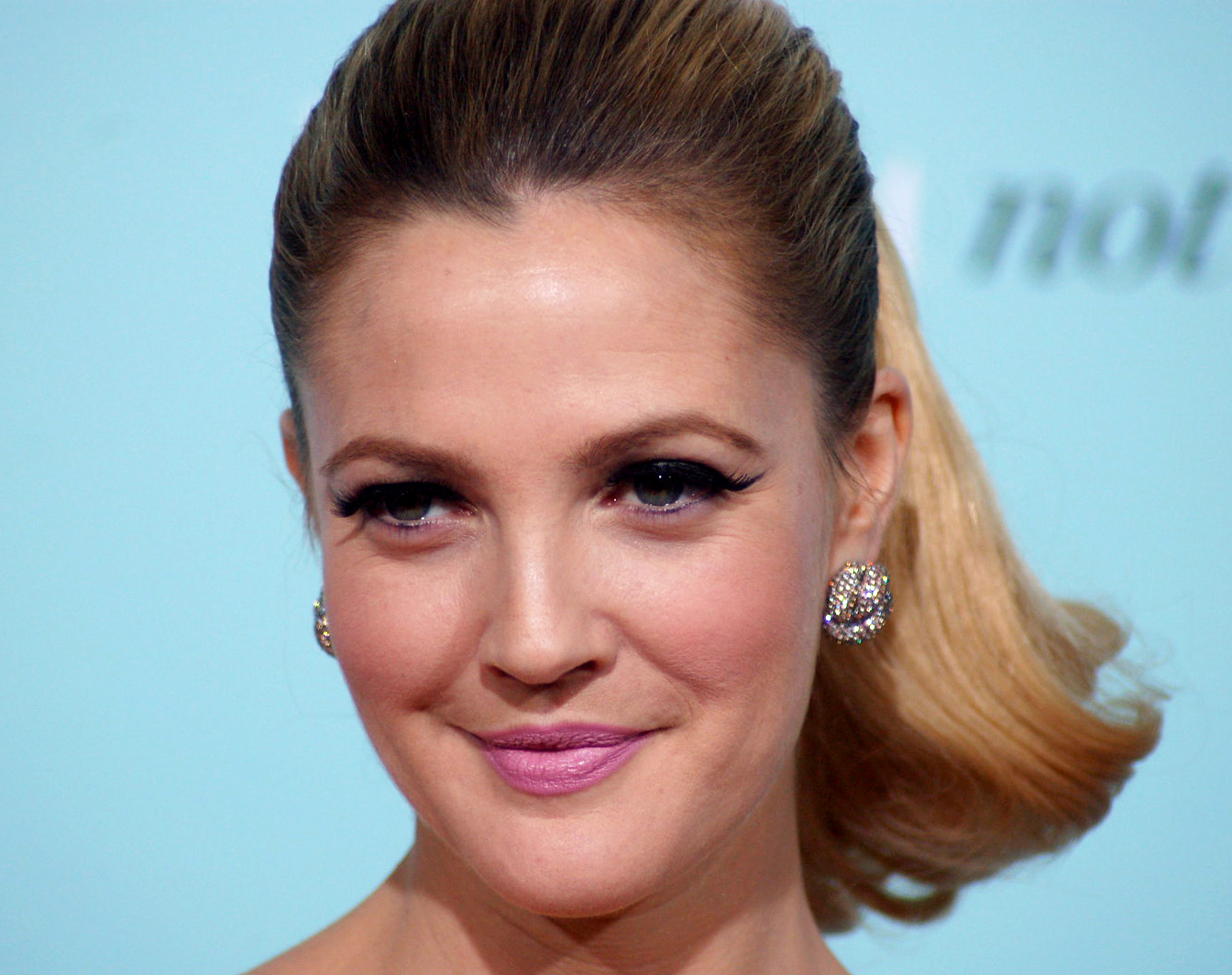 Drew Barrymore has been under a spotlight since a pup nipped her mug when she was 11 months old. Even at that young age though she seemed to know that it brought great responsibility. She also seemed to know the scrutiny would bring great opportunities, and it would be her choice whether to succeed or to fail. On that day, infant Drew chose to succeed. She laughed off the little doggie bite, wooed the Puppy Chow folks and crawled away with the job. It would be but the first of countless occasions that put Drew in front of the cameras she was literally born to charm.

And boy, did Drew charm the cameras! At the age of seven that charm helped Steven Speilberg’s E.T. become what was then the highest-grossing film of all time. It also sparked such high profile exploits as hobnobbing with President Reagan and hosting Saturday Night Live. And it gave the entire country a chance to fall for Drew Barrymore.

Young Drew apparently wasn’t quite ready to become America’s Sweetheart, and she spent much of the next decade trying to rip that image to shreds. When Drew wasn’t tearing up the screen in trouble-making pictures like Poison Ivy, Guncrazy and Bad Girls, she tore up Tinsel Town, providing the paparazzi with party girl fodder whenever the sun dropped. And when the party was over, Drew stripped off her clothes and posed for Interview, Guess! Jeans and Playboy. By the time she bared her breasts for David Letterman, the dumbstruck Late Show host looked like the only person in the country who hadn’t got a peak at nude Drew.

Steven Speilberg wasn’t happy about his goddaughter’s hijinks. So for her 20th birthday he sent over an old-fashioned quilt, a SFW copy of Playboy and a card that said “Cover yourself up.” The gift’s implications said so much more.

Drew Gets to Work

Drew got her Godfather’s message. Then she got to work. Drew played it playful and romantic (The Wedding Singer); poignant and stirring (Home Fries); and historically mythic (Ever After). She also joined forces with gal pal Nancy Juvonen and formed Flower Films began playing double-duty as both star and producer (Never Been Kissed).

The hits kept coming; so did the acclaim. In fact, critics were as unanimous with their praise as the fans were with their attendance. For many, many moons it seemed Drew could do no wrong. She teamed with Cameron Diaz and Lucy Liu for Charlie’s Angels and reprised her chemistry with Sandler for 50 First Dates. At the same time, Drew took true tale turns in George Clooney’s Confessions of a Dangerous Mind, Penny Marshall’s Riding in Cars with Boys and HBO’s resoundingly applauded Grey Gardens.

All the Wrong Men

But while America was again falling in love with Drew, Drew was again and again falling in love with all the wrong men. A bar owner, an actor, a couple of rockstars; each, in turn, keeping the Barrymore name a topic of hot gossip. Nobody knew how Drew was able to juggle the onslaught of failed romances with the succession of successful films, but everybody took turns guessing. When Drew was finally able to eject herself from the revolving door of wrong men and settle down with art consultant Will Kopelman, everyone guessed she’d found Mr. Right.

Turns out everyone was wrong. Sure, the relationship lasted five years. It produced two daughters to boot. But it also came with a lot of pressure. Then again, when a couple’s wedding pictures appear on the cover of People, the marriage will inevitably be fraught with pressure. When both principals are de facto American royalty (Will is the son of former Chanel COO Arie L. Kopelman), that pressure gets amped accordingly. And even a practiced Hollywood trooper like Drew Barrymore is bound to suffer some consequences.

A practiced trooper can be side-lined too. When the 2010s rolled around, Drew seemed to take a well-earned and much-needed break. In fact, other than a clip for Best Coast (“Our Deal”), a flick supporting gray whales and Greenpeace (Big Miracle), and a star/producer turn in a Netflix zombie romp alongside the likes of Timothy Olyphant (Santa Clarita Diet) that entire decade was basically Drew-free.

Of course Barrymore’s absence sparked all sorts of rumors. Muddy-minded mopes turned mud-splattered theories into social media currency. Clear-headed folks countered by claiming Drew was merely doing what all new Moms do – that is, taking time to care for her kids.

Meanwhile, anyone who truly opened their eyes would’ve seen Drew Barrymore was also setting the stage to take over the whole world.

Drew Barrymore Takes Over the World

Five years on the stage is set and Drew’s starring front and center. In fact, she’s not only taken over the whole world, she’s taken it in hand and opened it like the proverbial oyster. And, of course, since this is Drew Barrymore, she’s extracting nothing but pearls.

The Dear Drew line for Amazon begets Wal-Mart’s Beautiful by Drew Barrymore, The Drew Barrymore Show begets Drew Magazine; and the long-time facing for Cover Girl begets the Flower line of cosmetics. Drew even proved she’d become a Rebel Homemaker by booking-up with chef Pilar Valdes. Oh, and that production company she launched with Nancy Juvonen in order to bring the world Never Been Kissed? Well, its name has since become affixed to everything from the Charlie’s Angels franchise to Drew’s eponymous TV show.

In other words, Drew Barrymore the brand has become about as bankable as it gets.

At the center of it all however, is Drew Barrymore the person, without which none of the above would be possible. The Drew who first showed her business moxie when she became emancipated at 14 and who first showed the size of her heart when the UN appointed her the World Food Program’s Ambassador Against Hunger back in 2007. The Drew who took everything that anyone ever threw her way and turned it into something beautiful. Yes, that Drew.

And that Drew has not only been sober for three solid years, she’s also enjoying every minute. To prove it, she took to the pages of her own mag and penned the very personal “Take Care of Yourself.”

Drew’s essay says giving up alcohol has been “one of the most liberating things in [her] journey of life.” And that sobriety has allowed her “to finally become free of the torture of guilt and dysfunction.”

Freedom doesn’t come easy of course. It takes stepping up to the mirror and looking yourself in the face. It also takes summoning physical, mental and spiritual strengths.

“One of the bravest things you can do is slay those dragons and finally change an awful cycle in which you’ve found yourself stuck.”

She’s not kidding. The cycle of addiction is awful. Oh, it’s not so much that kicking liquor is hard (though of course there is that), but that facing life without it is harder. Hardest of all though is how much the addiction weighs on our lives, and how much living we miss as a result.

That applies to everyone, whether you’re an everyday Jack or Jill, a bold-face name like Drew Barrymore, or someone who falls somewhere in between. Addiction hits hard. It hurts hard too. And there’s no sense making it harder on yourself.

“Take a moment, take a breath, and give yourself a squeeze,” writes Drew. “We’re all just doing our best out here. And that in and of itself is something to celebrate.”

And how! Thanks Drew!

Are you seeking sobriety? Would you like to live the rest of your life free and clear of drugs and alcohol? Then please give Healing Properties a call. We’ve been helping men get sorted for two decades; we’d be honored to help you too.