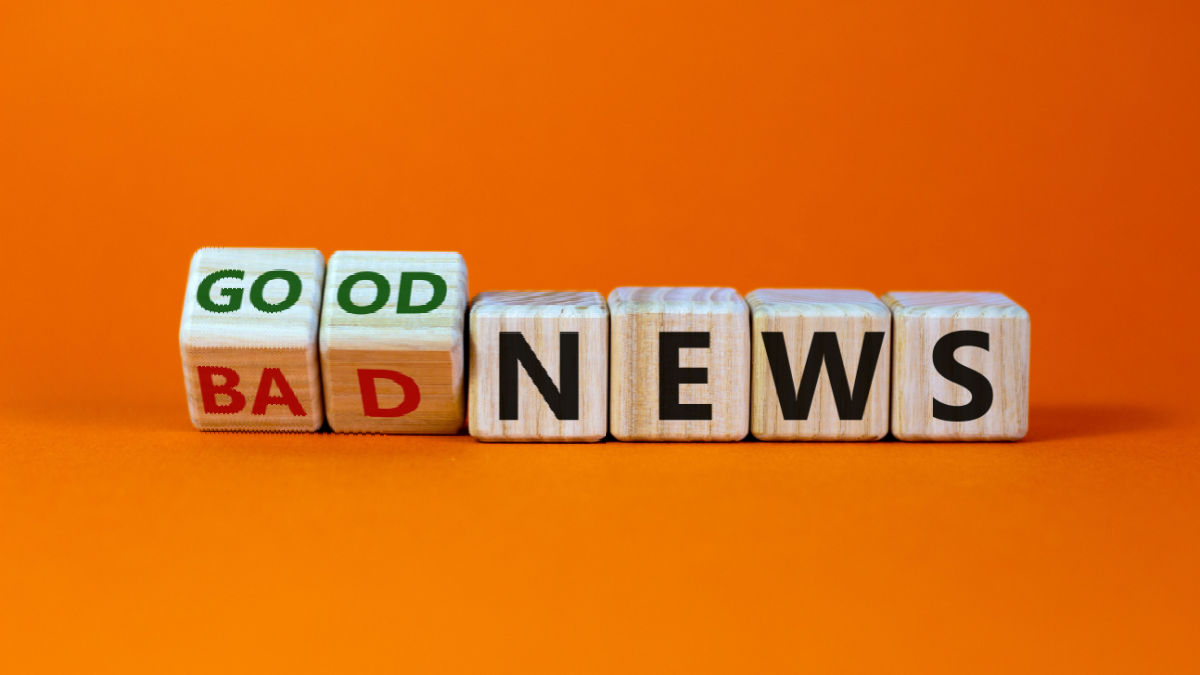 The news was bad. Real bad. So bad, in fact, that we almost didn’t click on the story. But we’re human. And tragedy gets our attention, especially when it concerns our field.

Then, just as we were bracing ourselves, there was even more bad news, splashed clear across the top of the site’s main page. Drive-by shootings, child assaults, fatal car crashes, and chronic mental conditions, all crowning the tragedy that brought us there to begin with.

Our stomach took a turn for the worse.

Thankfully though, a twinkling of good news beckoned from the upper right corner. And we reached for that glimmer of hope as if it were the elixir of life itself.

Perhaps that’s the point. We instinctively reach for something good in order to shield us from all the bad. Good news is like that. We read it for comfort, of course. But we also use it for protection. To fortify ourselves against bad eventualities. After all, a steady diet of bad news isn’t good for anyone. It can’t be. It most certainly hasn’t been good for society.

The above situation arose on a site called CT Insider. The site’s not at fault though. Not by a longshot. After all, the property serves as the flagship of the Hearst Connecticut Media Group. And since the HCMG’s bounty of media outlets spans the entire state, bad news is inevitable. As the above proves, it can inevitably beget a blanket of bad news teasers too. When that happens, the only option is to reach for some good news – quickly.

Oddly enough, it was good news that initially brought us to CT Insider. We’d seen a Good Morning America segment about the Middletown Harm Reduction Initiative, a non-profit founded and run by two Wesleyan University students whose compassion and understanding is very much at odds with the way their generation is portrayed these days. It was when we’d gone Googling around for further info that we stumbled upon CT Insider.

Unfortunately, we also stumbled upon one of the saddest stories anyone would ever read or write, let alone live.

Bad News Doesn’t Get Much Worse

We’ll just print it as it ran:

“The 13-year-old who overdosed on fentanyl at a Hartford school on Thursday died Saturday, police said.”

Snip off the required “police said” and you have a sentence as tragic as Hemingway’s purported “For sale: baby shoes, never worn.” As far as stories go though, it’s not nearly as complete. Yes, like that infamous six word precursor, there’s a beginning, middle and end. But here those three parts simply fulfill the obligation of a news item. And news items seldom have either the time or the space to tell the entire story.

Middletown Press reporter Adam Hushin wasn’t assigned to write the entire story anyway; he was assigned to deliver the essential, which is exactly what he did. That’s why we know police found “evidence of narcotics located in close proximity to the overdosing juvenile,” and that those drugs were “later tested and confirmed to contain fentanyl.” We also know that two other teens were found on the scene with the overdose victim and that those two teens were taken to the hospital, treated and released.

Most alarmingly was that a subsequent search of the school uncovered 40 bags of fentanyl. That’s right, Hartford Police found 40 more bags. In three separate locations no less.

How many more young students might have died had the cops not initiated that search?

But Hartford Police did initiate a search and Hartford Police canines did find a substantial amount of deadly drugs. And their efforts prevented what could’ve easily been a mass casualty incident.

Naysayers might say Hartford cops were simply doing their job – and they’re right, HPD was simply doing its job.

We’re talking a job that has zero room to wiggle and even less tolerance for mistakes. A day-in, day-out onslaught of unknowns that requires both know-how and foreknowledge. And where serious woe comes to those who can’t tap both at will. A job that often makes the difference between life and death, as well as lives and deaths.

We digress. HPD did its job because that’s what it does – the Job. And that job saves lives in the process.

A cop’s job sometimes also allows for silver linings to peek through even the darkest of clouds. And to know that even more families aren’t planning funerals for their own thirteen-year-old kids most certainly lessens the darkness of this cloud.

That’s not the only sliver of silver to be found lining the dark cloud of drugs and/or addiction. WTAP’s Samantha Cavalli told of one Maddox Rader, a Parkersburg, West Virginia high school footballer who, at 14, found an overdose victim in a park bathroom. The then-junior was traumatized by the incident of course; he was also galvanized to help the family that had been left behind. So Rader gathered a few of his teammates, slapped on the name Mad’s Muscle Men, and then began volunteering to move furniture, mow lawns, or perform other such services for families who have been impacted by addiction. No simple feat in the heavily-impacted Mid-Ohio Valley that they call home.

Meanwhile up in Massachusetts, WBUR’s Martha Bebinger filed an NPR piece hailing the recent efforts of Salem Hospital to provide on-site treatment for sufferers of Substance Abuse Disorder. As the world well knows, most hospitals aren’t equipped to handle such ailments. Salem, however, is seeking to change all that. And though it took the hospital years to land the necessary grant, the addiction consult service put together by nurse practitioner Liz Tadie is already humming at capacity. No surprise when even five years ago an estimated 1 in 9 hospital American patients were suffering from some form of SUD.

Oh, and that sliver of good news we’d originally latched on to at CT Insider? Well, that was written by the Fairfield Citizen‘s Josh LaBella and concerns a community-minded energy company and its community service friends. The company’s called Trinity Solar, and its friends include Operation Hope, which runs housing and feeding programs in the Fairfield area.

Here’s how it works. When a prospective client requests a free consultation, Trinity agrees to donate $100 to the non-profit of their choice. If the client agrees to install solar panels, Trinity makes it a $1000 donation. Thus far, Operation Hope has reportedly received $16,600 over the past three years.

How Trinity Solar’s good neighbor program originated makes the good news even better. See, Lori Scala handles Community Outreach for Trinity Solar. After Hurricane Sandy had severely damaged Scala’s home, Operation Hope stepped in with assistance. Scala, in turn, came up with this community-minded initiative. And Trinity’s been paying it forward ever since.

Healing Properties thanks all the good-news-generators out there. We also hope their stories will inspire others to do likewise, over and over, again and again, until the world gets saturated in all that goodness. And for those who think a world saturated in goodness might be a bit much, well, let’s give it a try before we decide what is and what isn’t too much.

If you’re battling SUD, of any kind, please reach out for help. Who knows? There may be a a Mad’s Muscle Men or a Middletown Harm Reduction Initiative in your community. There may even be a Salem Hospital type. The point is, wherever you are, there’s someone. And if you need help finding that someone, well, give us a ring. We’ll gladly get you sorted.